Barnacles are also part of the Crustacea subphylum. The only time I have been exposed to and/or looked into the detail of barnacles was on a Marine Biology field course to Millport, Scotland in June 2012. I studied the Chthalmus genus of barnacle, and their orientation to the coast.

Below is a photograph I took in Scotland of the coastline covered in these little creatures. 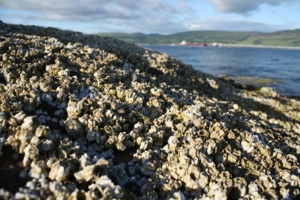 They are exclusively marine, and typically live in erosive settings such as on the coastline and in shallow waters.

I found one barnacle in our collection here at Manchester Museum called Acasta spongites which is a sponge-inhabiting barnacle. It is unusual in that most species of the Acasta genus are distributed in subtropical and warm temperate regions of the world, but this species is the only known member to be found in northeast Atlantic waters.

It ranges from the British isles to the Mediterranean through the Atlantic coast of France in occurrence. British Isles distribution is limited to the south and southwest coasts only.

What I find interesting is that this species lives solely inside sponges, namely the Dysidea fragilis species.

They look beautiful and delicate when dried in their boxes, but also exhibit an excellent camouflage in that the sponge usually covers the barnacle giving it ultimate protection whilst living in the dangers of the underwater world.