When updating the nomenclature of specimens at the museum, I must read many articles and check catalogues and checklists to find the correct combination of genus and species, as well as the higher classification of each specimen. 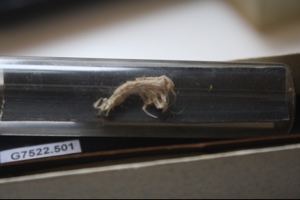 There are many ‘easy’ specimens, which are listed in many checklists and I can be sure they are correct, however one specimen which caught my eye was one described as Euthemisto thomsoni. It was contained in a bottle and previously was kept in spirit. This is the story I have followed about this specimens name so far:

In 1879, G.M. Thomson examined some crustacean specimens, and referred to them as Themisto antarctica Dana. This was very similar to a species later found by Stebbing on the Challenger Expedition during 1873-1876. Stebbing described this species in the Challenger Report as Euthemisto thomsoni, believing that these were different to the species described by Dana due to their usually carinated dorsal side in adults. As this carnation was not mentioned by Dana, Stebbing was sure this must be a new species. And so the name Euthemisto thomsoni was given, as well as another species E. gaudichaudii Guerin which was recorded in the Challenger Report. It wasn’t until 1889 that Bovallius came to review this allocation, and he was sure Stebbing was mistaken. The carination of the dorsal side in adults varied in all the specimens he found. In females bearing eggs, this was a far less distinct character than in males of the same size. This lead Bovallius to believe that E. thomsoni was actually a junior synonym of E. gaudichaudii which itself was identical to E. antarctica.

I then must go on to find checklists and catalogues which hold these combinations, and look in books and printed documents to see whether there are publications which support this combination of genus and species, and author/date.

In the World Register of Marine Species (WoRMS), Themisto gaudichaudii is an accepted combination by Guerin, 1825. This leads me to believe this is the correct name for this specimen.

This is the process I go through with each specimen to identify the correct name.