Would you like to teach school students about eDNA metabarcoding in a way that goes beyond the usual explanation of just “what is eDNA”? Check out my lesson plan and activity below for a 2-hour session that works great with high school learners.

I was interested in teaching 16-year-old students about eDNA sampling, eDNA extractions, library preparations and sequencing, and even wanted to talk about the primer choices that go into eDNA metabarcoding studies. I wanted to do this in under 2 hours, in a fun and interactive way, with learners who hadn’t ever been in our labs before, so here’s what I came up with. Let me know if you have any other ideas too!

This activity taught them about “eDNA metabarcoding” which lots of you have seen me post cartoons about before!! To make it understandable for high school students, I printed different marine animals onto pieces of paper and put them into a ‘pool’. We then discussed how the species in the pool would be sampled, and how different species might be detected (or not) during the eDNA metabarcoding process in the lab. Using this easy to understand method on paper, we were able to talk about a lot of different processes from random sampling to DNA extractions, PCR and primer choices, sequencing and bioinformatics. We even talked about the effect of primer choice on final species list!

The kids tried out their lab skills too! We ran gel electrophoresis and they saw how DNA looks when we add a fluorescent dye and put it under a UV light. They also each pipetted 200 uL of our “eDNA sample” (actually tap water 😂) into tubes, and compared it to my 200 uL sample to see how close they could get to “good pipetting”. Some of them pipetted a lot more or less than me, which caused lots of laughter!

Printing the species cards: You will need to come up with some relevant species for your study topic. For me, I’m studying marine life in South Africa using eDNA metabarcoding, so I chose various marine species. I made “species cards” which included a photo of the species, the common name and the scientific name, and I gave each species a random “barcode” made up of nucleotide bases. You can do the same for your target taxa. Print enough of the species cards that each student has at least two, plus a few more. If I had 10 students, I’d probably print 25 species cards. If you have a larger group, or if printing a lot is an issue, then maybe you can pick certain students to do the activity, rather than everyone being involved at every stage. Cut out the species cards, fold them and place them in a large bucket. This bucket will act as your environment, in my case the bucket is the ocean. Here’s an example of two of my species cards:

Printing the primer sequences: You’ll then need to come up with a primer sequence that will capture your target taxa, or even a few different primer sequences to show them how different primers affect which DNA is amplified. You can make it a lot more complicated than this example (e.g. around 20 bp would be good to reflect real primers but this might be too long for teaching purposes depending on how much time you have). You want to choose a DNA sequence that shows primers can amplify multiple species or just single species depending on how you design them. If you’re doing this activity then you already know about primers (I hope!), and you will use this printout of the primer sequence to explain that the PCR primer sequences bind to complementary regions of the target nucleic acid sequence during PCR. I also included a little illustration of the DNA strands, and a reminder of A binding to T and C binding to G. They do learn this at school but I thought it was a nice reminder.

Before the lesson: Prepare a big table where all the student can fit around (I had a group less than 10). Place the bucket in the middle of the table (containing the species cards). Then, have a smaller bottle that can act as a sampling bottle. Put the empty bottle on the table too, ready for sampling of the “ocean” later.

For the gel electrophoresis demonstration, pour the gel into the gel tray a few minutes before the students arrived so it is setting during the start of the session. You can also prep a DNA ladder, dye and some DNA samples in tubes ready to pipette during the session.

0:00hr In the first half-hour: whilst the gel is setting, I welcome the students to the lab and spend some time telling them about our labs and about eDNA. I show them my eDNA comic, which you can download for FREE here. I find it useful to talk through the comic with the students, then let them ask any questions as we go along.

0:30hr Running a gel: After talking about eDNA, they want to see a bit of the DNA action and are probably bored of your voice already!! At this stage I took them to the gel electrophoresis room and explained to them how we look at DNA. I showed them the gel, and I added dye to the DNA samples and pipetted the samples and ladder into the gel. If I had more time, I’d definitely let them pipette the DNA samples into the gel themselves but it’s not necessary, they’re still very engaged just watching.

0:45hr The eDNA activity: Bring the students around a big table, and introduce the activity by saying we’re now going to talk through the different stages of eDNA metabarcoding. You can teach them directly about the different steps using the props. I found it nicer to guide them through the steps and hint towards things, and let them come to their own conclusions, and they’ll ask lots of questions that way too, as follows. 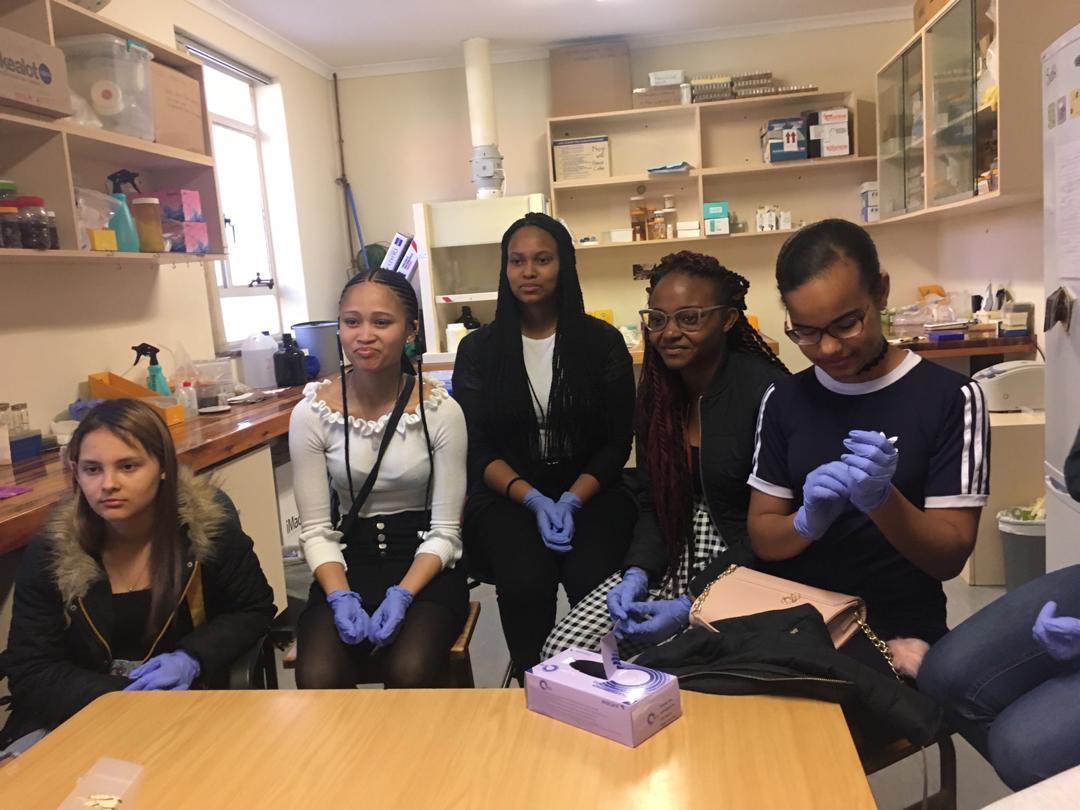 The bucket is the ocean, and it contains lots of different species cards to represent the DNA that’s floating around in the ocean. Each species card is a piece of eDNA. When I am in the field, I collect a bottle of seawater and filter that water through filter paper. Here in the activity, we are going to collect 1 bottle of “eDNA” from the ocean (the bucket), and put it into the sample collection bottle.

Now, we have a sample bottle that contains DNA from lots of different species. It doesn’t contain ALL the DNA from the ocean, but it hopefully contains a good representative amount (this is a good discussion point about ecology and representative sampling).

The DNA in our sampling bottle is just water filtrate at the moment, so we want to extract the DNA from this filtrate. During DNA extraction, various things can affect which DNA is extracted and which isn’t. If you design a good DNA extraction method, you can get lots of the DNA extracted. 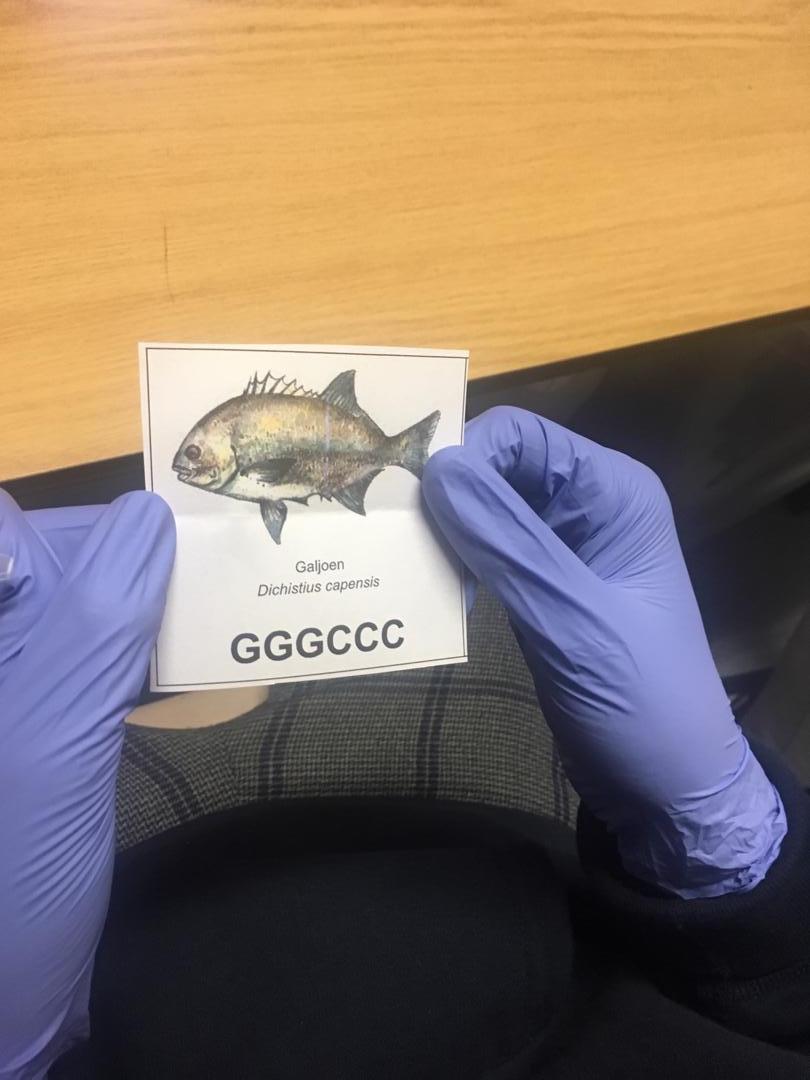 You’ve extracted DNA from the sample, and we now have 10 (or however many students) pieces of eDNA that were extracted. We have lots of different species from different animal and plant groups.

With a DNA extract, we can do lots of different studies. For my study, we want to work out what DNA is inside this DNA extract because we don’t know yet, and it could tell us about the species that are living in that area of the ocean.

Explain PCR to the students. I like to use the example of a shopping mall. I pick a student from the group, let’s call them student A. I tell the group that if I wanted to find student A in a shopping mall, it would be difficult. There could be hundreds of other people in the mall, and I’d have to go through all those other people to find student A. My job would be easier if I could make thousands of copies of student A. Suddenly, the shopping mall would be full of student A and I’d be able to study student A easily. We do the same for the DNA that student A is holding. In a DNA extract, there is lots of DNA, and we have certain DNA that is our “target DNA”. Whatever DNA student A has, we can design a certain PCR reaction that copies that DNA, and we’re left with a PCR product that contains many, many copies of the target DNA, and barely anything of the non-target DNA.  You can then explain PCR in more detail, including PCR primers and how they can copy very specific DNA, or more universal targets depending on the primer sequence.

Ask the students to work out which of their DNA sequences will amplify based on my primer sequence (which will be present in the PCR reaction).

Everyone who’s DNA is amplified (based on the primer I show them) can put their DNA into the middle of the table. We’re now left with a certain set of species (or maybe one animal group) that will be amplified.

We would then send all these DNA sequences off for high throughput sequencing.

Explain sequencing and bioinformatics, and students will have lots of questions about the different possible studies you can carry out. Explain that you can’t ‘see’ the species that the DNA comes from when it’s just a DNA extract, or even a PCR product. The gel electrophoresis (which we prepped earlier) will later only show us how big and maybe how much DNA is in there, which might answer certain questions, but it doesn’t tell us which species the DNA belongs to, which is what I’m interested in. That’s why we sequence the DNA to see the DNA sequence that they can see on their species cards, then we use bioinformatics to process this information, and later match the DNA to known DNA sequences.

The students can now see how we use the different steps of sampling and filtering, DNA extraction, PCR, sequencing and bioinformatics to generate a species list from a simple water sample. They have an appreciation of how different species may be detected (or not), and how tweaking the experimental methods can give different species detection in the end.

1:15hr Pipetting competition:  Give each of the students a pair of gloves, an empty 1.5 ml Eppendorf tube, and a DNA sample in an Eppendorf (I used tap water for the DNA sample but told them it was like a DNA sample inside). Using one pipette (or more if you have more), show the students how to use a pipette and how to change the volume. Ask one of the students to set the pipette to 200 uL. Then, tell them they will take it in turns passing the pipette around the table, and each of them will transfer 200 uL of their DNA sample into their empty Eppendorf tube. At the end, you can pipette one yourself to show the students what 200 uL should look like in the tube. Compare the volumes in the different tubes. There will be lots of laughing, and make sure you encourage them by saying this is a skill that you practice and improve with time, and nobody’s perfect the first time round! Lots of the students wanted to keep the latex gloves, so I think even pipetting is just a really novel experience for them. 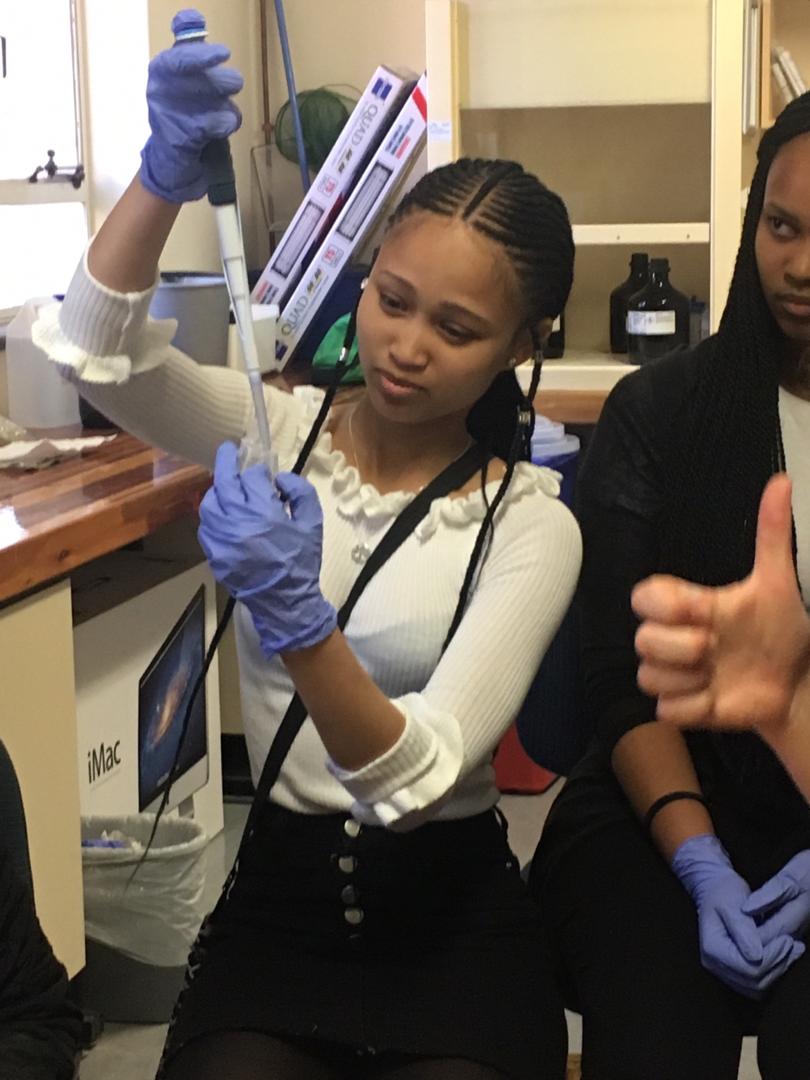 1:40hr Checking the gel: We then went back to the gel room and checked on our DNA which had been running for an hour and a half. We had a great discussion about what the gel photo means, including size of bands, brightness, location, and they were able to ask really interesting questions based on the stuff they’d learned in the session. 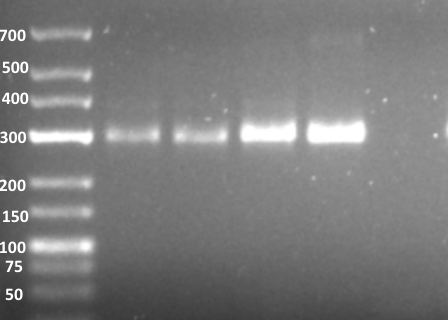